If you would like to stay up on all of the latest news, information, and fun facts from the Kern River Parkway Foundation, please sign up for our monthly newsletter on the home page. 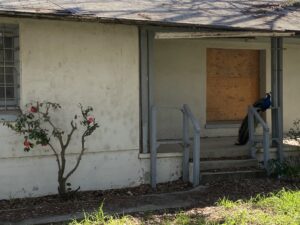 On Tuesday morning February 25, KRPF, Audubon Society, California Native Plant Society, and Sierra Club members met with local Landscape Architect Fred Simon at the Hart Park Adobe located in Section 7.  The purpose of the Charrette or meeting was to have public input on what the landscaping should include in the near future.  Fred Simon completed a “concept plan” in May 2019, which was a fantastic first step.  The plan included maintaining the 45 existing trees, and planting over 100 native trees.

This meeting provided input for Fred Simon to modify the “concept plan” to a more definitive drawing.  Member suggestions included the need for a demonstration garden, hiking trails, new roosts for the peacocks, a plant nursery, and solar panels for both the adobe house and a future electric vehicle recharging station.  A pavilion and lecture area were touted in order to allow docents and invited experts to give presentations.  All agreed that the outdoor landscaping would be done incrementally, with all organizations working with the County to obtain grant funding.

Problems in the Riverbed

In Bakersfield, Kern River bed bulldozing continued during February. The encampments in the riverbed near Golden State Highway have reached a crisis point with cars, trash, and unsanitary conditions that will likely breed disease. It appears that the elaborate homeless encampment on the center island in the river near Riverwalk is finally being cleared. One resident said she had lived in the encampment for five years and the group is now moving out toward Enos (Movin’ on out … to the Westside). The center island camp has been an ongoing violation, reported to the city many times, but it seems the "rapid response" team didn't respond rapidly. The biggest question is whether the City of Bakersfield will clean up the mountains of trash left behind on the island and near the equestrian trail on the north side of the river, before the discarded propane tanks, human waste, and other trash pollute the river and surrounding area. 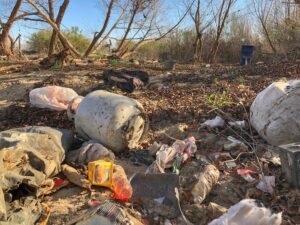 Kern River Parkway Foundation continues to identify and receive complaints regarding the bulldozing of the riverbed and the destruction of established native plants and trees near the Bellevue Weir. The people expect better management of our river.  It is clear Bakersfield does not have a current management program that incorporates EIR-mandated mitigation when working in the primary flood plain. The EIR (both 1985 and 2016 versions) states: “The Channel Maintenance Program involves phased removal of river sand, soil, and vegetation within the primary floodway that impedes flood flows. A maximum of 70,000 cubic yards can be removed in a year. … Mitigation for the loss of vegetation within the primary floodway is provided by riparian restoration planting activities within the secondary floodway.”  To date, no riparian restoration planting activities have occurred.  In fact, the only activity over the past years has been the loss of vegetation in both the primary and secondary floodways.  We hope to see improvements in this area.